Last week our social club participated in a Murder Mystery zoom! Each of us were a chosen character with a different personality and traits.

We had to ask each other questions and figure out who had murdered the Mayor.

What a fun night thanks to Amazing Co for hosting! 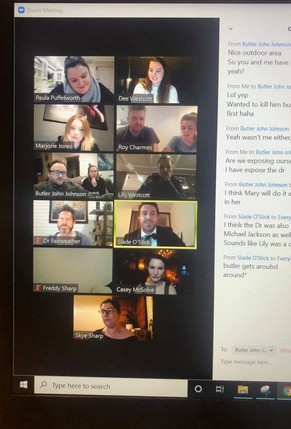 Recognising performance based on settled commission, the top 20 offices in the Ray White Victoria/Tasmania network were awarded.

“We are so thrilled – every member of our team has worked extraordinarily hard and it is so wonderful to be recognised as one of the best performing offices not only in the state, but within the Ray White Group.

“This award not only recognises the success of the past year, it is also great motivation to work even harder in the coming year,” Patrick said.

“It fills me with immense pride every year when our state awards are announced and our businesses are recognised – to see so many performing so well within the group can be put down to hard work and dedication.

“So many of our offices are achieving and exceeding personal bests. Some exciting results for our group overall,” Mr White said. 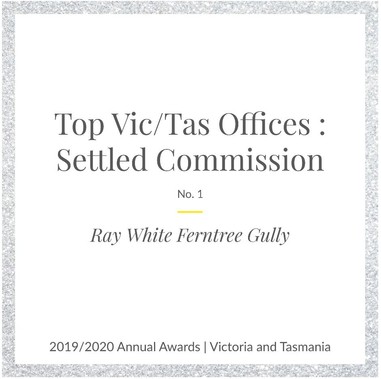 Whilst we have had to keep apart we have done so much to keep our team together.

Over the past few months we have really focused on our team. Ensuring that we keep in close contact with each other through daily team meetings, weekly team catch ups, virtual Friday night drinks and monthly whole office virtual meetings. Mental health and wellbeing has been a large focus for us, we have completed regular check in survey’s so we can see just what our team needs to make sure we all get through this strange time together.

Even though we can’t all be in the office to celebrate milestones and birthdays, this hasn’t stopped us!

We have delivered over 40 lots of donuts for staff birthdays, sent 19 pizzas for our weekly best practice winners, sent 18 gifts to say thanks to our team members, held a walk a thon which saw our participants walk the equvilant of Melbourne to Darwin & continued to utilise our staff Facebook page to complete over 50 Guess Who’s, colouring competitions, brain teasers and get to know you questions. 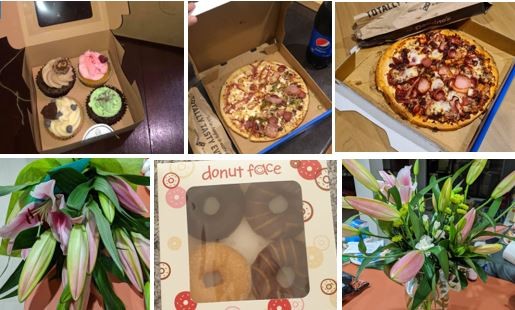 Whilst most of our team couldn’t spend time with their Mums this Mothers Day we still wanted our Mums to feel the love on their special day.

Whilst our team are all working from home we still love to celebrate fun International days.

This week we celebrated International High Five Day with some virtual high fives from the team! 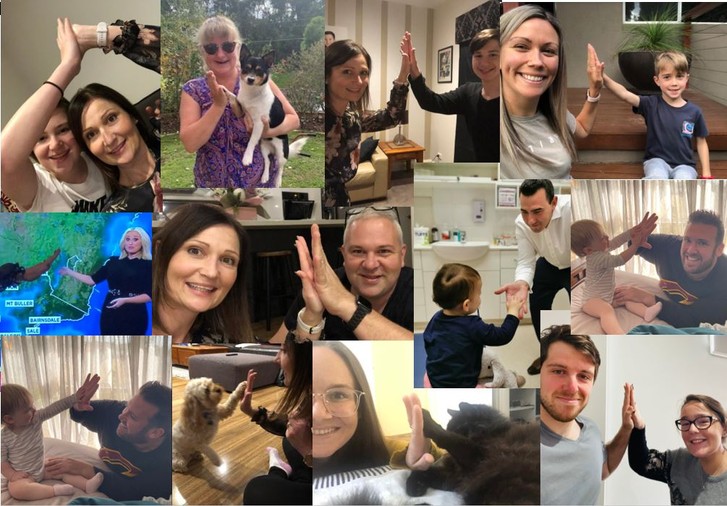 Before social distancing was in place our social club went down to MANIAX Axe Throwing in Abbotsford for their monthly night out.
Axe Throwing was an activity no one had ever experienced before and they all loved it!
What an awesome night!! Last week we were lucky enough to have Lauren Burns, Olympic Gold medalist speak with our team. Lauren shared her stories about her time competing for Australia, taught us some Taekwondo, as well as strategies for us to get the best out of the year ahead. Thank you Lauren for kicking off our year with a bang! In late December our team celebrated the year that was 2019 with a boat cruise down the Yarra River. With live music on the boat helping to get the celebrations started the team then disembarked at Riverland – The Vaults where they enjoyed the remainder of the day. The day was filled with fun, laughter, good food and drinks. Check out our video of the day!

Congratulations to our Property Management Team

Our Property Management team were treated to lunch at Lucy Liu in Melbourne CBD last week for achieving their quarterly target. Congratulations team!! 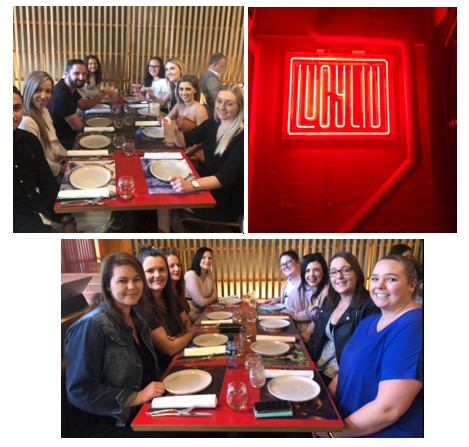 Our Social Club enjoyed dinner at Okami in Wantirna. The team feasted on all you can eat dumplings, sushi and all things Japanese. The Social Club have regular events ranging from dinners, movie nights, snow trip and comedy nights. Our Property Management team were treated to an exciting and well-deserved reward trip to Sydney. This reward was for hitting their set targets for the year.

The team arrived at Watsons Bay where they started with lunch at Doyles on the beach.

They were then whisked over to Luna Park on a water taxi where they enjoyed dinner at O-Bar & Dining.

On Sunday some of the team completed the Sydney Harbour Bridge climb whilst others decided to relax with a massage at Endota Spa. 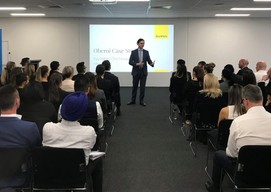 In late April, AdamDownes came out to speak to the OneNetwork. Adam is the Head of Performance Management for the Ray White Group.
His talk was based on a case study about the Oberoi Hotels, and how they received a complaint from a customer who couldn’t sleep because of a train line that ran 1 mile away from the hotel.
The theme of the case study is around NPS and the main question to consider when reading the case study was ‘How would you deal with the customer?’
This exercise invited great conversations about customer service from our entire group as well as starting conversations about how we could apply these principles in our roles.
It was a great session followed by drinks & nibbles in the games room.

Our “Rat Pack” team were rewarded to a day trip to Sydney to climb the Sydney Harbour Bridge. This was a reward for hitting targets set for the year.
The team were at Melbourne airport before the sun has risen to catch a flight to Sydney, after the bridge climb they were treated to a delicious lunch, before flying back into Melbourne to end their day.
A great incentive for the young team to push even harder next year with a trip to Vegas in sight!

A delicious reward!
A group of sales agents from Ray White Ferntree Gully were rewarded for winning 2 competitions set by sales mentor Chris Watson. The first competition was for the most amount of data gathered in a month. The second competition was for the most face to face with pipeline in a month. The winners and runners up were Thinh Cu, Jimmy Shan and Paul Scott. The winners enjoyed being picked up by a chauffeur driver and driven into the city for a 3 course meal. A well earned reward! Congratulations

With growing teams at Ferntree Gully, Bayswater, Commercial and Loan Market, we thought it best to hold a “getting to know each other” speed dating session. This morning the team of 70 took a seat not knowing what was to come. With everyone set and timers ready, it was then announced that they would speed date (get to know) each other for 1.5 minutes with each person before moving to the next member. To help them along, there were 20 questions up on a projector and pinned up around the room to help as conversation starters. Questions included “What is your biggest fear?”, “If you were a super hero, what power would you have?”. With some very amusing answers and some great in depth conversations, the team feel like they know each other a lot better.  A great team bonding exercise and a very fun morning.

There were celebrations all round for the agents of the Ferntree Gully office who made legend status (writing over a certain amount in commission) for the year 2014. The day started with enjoying the views at breakfast from level 35 at Sofitel followed by the group heading to their first activity at the shooting range! Once they’d had fun with a gun and some lunch they then headed to their 3rd and final activity for the day doing scuba diving in Portsea. Needless to say, the team were all exhausted after a fun and legendary day!
Congrats to the 2014 legends club members: Aaron Clarke, Peter Gindy, Ben Thomas and Patrick McConnachie.

We would like to say a huge congratulations to Ferntree Gully Loan Market broker Daniel Turski and wife Mel for the arrival of their second daughter Cora Belle Turski.
Cora Belle is little sister to Arisah who is already a very proud big sister.

Dan has reported that mum and bub are doing well.
We wish them all the best with the new little addition and the Ferntree Gully team can’t wait for a cuddle!

On Friday 29th of June Ray White Ferntree Gully participated in Red Nose Day, supporting SIDS and kids by giving out red noses to the first 50 clients to the office. There were a lot of laughs, some great red nose day photos and lots of kids very excited to receive a red nose (which this year also came with an awesome stick on tattoo!). All the fun and photos were posted to the offices Facebook page so as clients could tag or share their red nose day snaps with friends and family. A great charity that encourages being silly for a serious cause!

Last Saturday night, Ray White Ferntree Gully were very proud to help out the Knox Community Christmas support appeal trivia night and launch of the sharing the joy appeal.
Syarif Machfud volunteered his time and skills to call a live auction for some great prizes for the large crowd who gathered at the RAFT Anglican Church in Rowville. The turnout was amazing and the list of items to be auctioned was endless. As well as some great live auction items, there were also numerous silent auction pieces which were a big hit with the crowd. The night raised an amazing $4,800 which will go towards purchasing food and toys for the appeal. 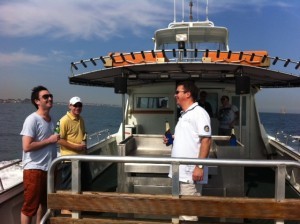 ______________________________________________________________________________________________________
What a legendary day!!!!
Last Friday Ben Thomas was celebrated as the first ever member of the Ray White Ferntree Gully Legends Club. The club was introduced last year to celebrate any agent that writes over $400,000.
The day was jam packed with action starting by picking up 2 sports cars for the day (a Lotus and a Ferrari California). Ben, Syarif (Ben’s PA) and Matt Sims enjoyed  a drive down to Queenscliff, they then crossed the bay on the ferry and made their way back up the Mornington peninsula to Melbourne stopping only briefly to chat to a friendly man in a nice uniform that wanted to let them know he liked their cars…
Once back in Melbourne the boys took a 20 minute city helicopter flight which provided some more spectacular sights of the city and the Bay. Before dropping back the cars they took a lap of Albert Park and chapel street.
They finished the day off in style enjoying a beer at a couple of bars and one of Melbourne’s finest restaurants!
At this stage it looks like there will be 4 -6 agents that will make the ‘Legends Club’ for 2013. 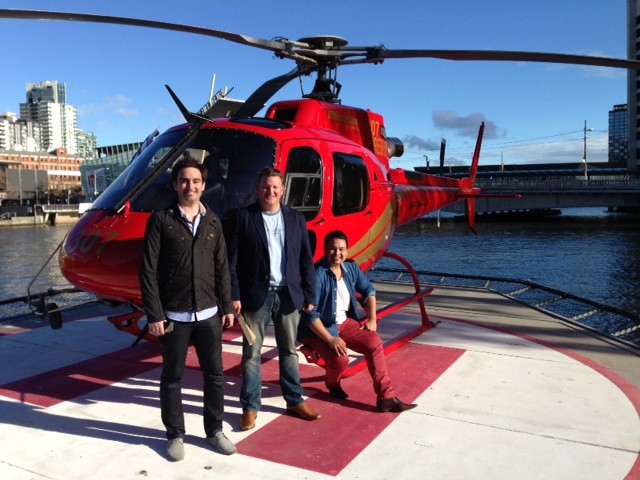